Defying Death as a Part-time Cybog

Posted by kosturcompose76 on August 30, 2016
Posted in: Uncategorized. 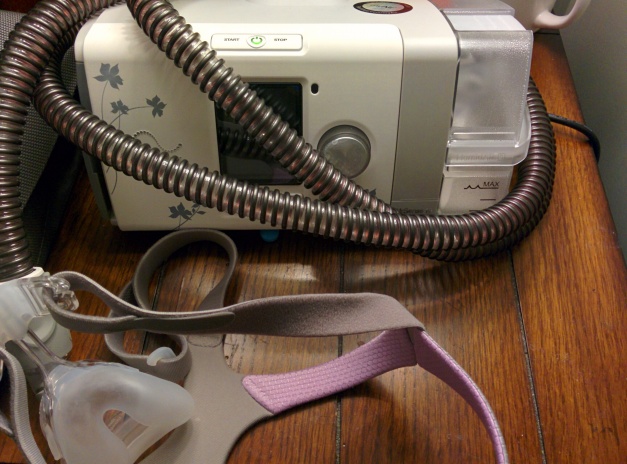 Apparently my minor snoring issue, and constant fatigue are sleep apnea. And apparently my new sleep device is going to make it so that I keep breathing _all_ night. I’m not convinced yet, I mean do I really need to breathe the _whole_ night? And I don’t mean to complain about the strange diagnostic process that resulted in me breathing all night for the first time ever, but what thought process can take you from “my patient has a chest cold” to “I wonder if she is slowly choking to death every night”?

Apparently I’ve been defying death my whole life. Not something I expected to find out, but now I know I think it’s the reason I’ve never felt the desire to leap out of an airplane or cliff dive. I apparently get all the adrenaline rush anyone could need just going to sleep, nearly dying, then wrenching myself from sleep only to repeat the pattern (if the test can be believed) every five or so minutes until the alarm goes off.

I have sleep apnea. A fun fact I discovered while visiting two specialists and doing a half dozen seemingly random tests as my doctor tried to figure out why I catch every cold that goes around and then some. (PS. I still don’t know.)

When the doctor suggested a sleep apnea test I wasn’t exactly enthusiastic. I was sceptical about how sleep apnea could cause repeated chest and sinus infections and I wasn’t exactly thrilled about sticking tubes up my nose while I slept so they could tell how much I wasn’t breathing. But I agreed because Andre was on the doctor’s side (apparently I snore) and I was hoping it would lead to something relevant.

So I tested, and I have it. (I’ve been getting a lot of “I told you so’s and significant elbows from Andre who was apparently right…again.)

In good news, this new type of broken has resulted in me becoming a part-time cyborg and that can’t be bad. (I’m sure I’ll work my way up to full-time.) I mean as a part-time cyborg, when the robots rise I’ll be seen as one of them, right?

PS. I’ve been informed that having a sleep apnea device doesn’t make you a cyborg and that robot overlords wouldn’t need a go-between with their human captives. I respectfully disagree.

PPS. I wonder if my characters will start having less traumatic experiences now that I don’t choke nearly to death every night. (I hope not.)

Posted by kosturcompose76 on August 28, 2016
Posted in: Uncategorized.

I looked at my CT scan and this is pretty much exactly what’s in there. Don’t feel bad if you don’t understand it right away, I’ve been living in my head for years and I still don’t get it.

The inside of my head is classified.

Not the information therein, just the structure. Totally classified. So classified that the CT tech let me see the results of my scan on his little screen but he wouldn’t let me take a picture. The inside of my head is rated eyes only.

Given its classified rating, I’m not really sure why the CT guy let me see the inside of my head. He didn’t even check my security level. I guess he assumed that possession of the head grants authority of some sort. But considering I didn’t even know the inside of my head was that important I’m pretty sure I’m not cleared to see it. (Seriously CT guy, don’t assume.  This is how leaks happen.)

PS. I feel a bit like a reverse Johnny Mnemonic. I can tell you all my thoughts, but information on the box I keep them in is strictly need to know.