Posted by kosturcompose76 on August 28, 2014
Posted in: Writing Exercises. 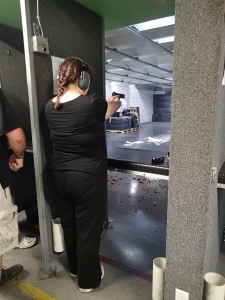 Me. After learning my painful how-to-keep-bullets-out-of-your-cleavage lesson.

I threw a zombie survival 40th birthday party for my sister.

First we went to the gun range.  Because seriously if the first time you’ve picked up a gun is during the apocalypse then you’re not planning ahead.

We shot at zombie targets and my sister got to use a shotgun and handguns.  (She is officially ready in the apocalypse…if she happens to find pre loaded guns while fleeing the hoard.)

I’m totally ready too.  Not only did I get to try the guns, but the gun safety guy showed me how to hold the gun so the casings wouldn’t fall down me shirt and brand my breasts.

He was super professional. When hot copper ejected directly into my bra and I was jumping around trying to keep my handgun pointed down range while I shook a the burny bullet casing out of my cleavage, he just calmly stepped up and took the gun from me so I could finish my little dance. Kudos gun guy. 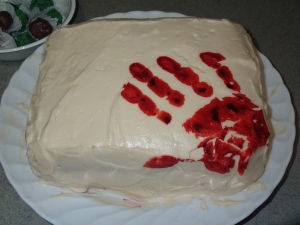 Red velvet cake…because there weren’t enough things that looked like blood. The hand print was just my hand dipped in red food colouring. (My palms were red for two days.)

Brain cupcakes. The top is fondant and the bloody interior is cherry pie filling. They were super good if you closed your eyes while you ate them.

After the burning stopped my zombie target didn’t stand a chance.  I may be biased, but I think my cluster of head shots was the best of all three of us (and really with zombie targets, it’s only the head shots that count right)?

Then we went home and ate dehydrated camping meals (rehydrated into somewhat tasteless mush), brain cupcakes and a red velvet (because it looked like blood) cake and played the walking dead board game.  Fun was had by all, or at least by my sister and I and really we were the ones who counted right? (I have to keep telling myself that because for some reason my shots lower in the body were less…precise. I really don’t want to think about why.)

Do you ever practice your apocalypse skills? Do you ever watch Doomsday Preppers? Do you judge me for answering yes to both of those statements?

Pretend you don’t (just for a second) and write about it.

New Additions to My Zombie Resources

Posted by kosturcompose76 on August 13, 2014
Posted in: Inspiration, My Progress, Writing Exercises. 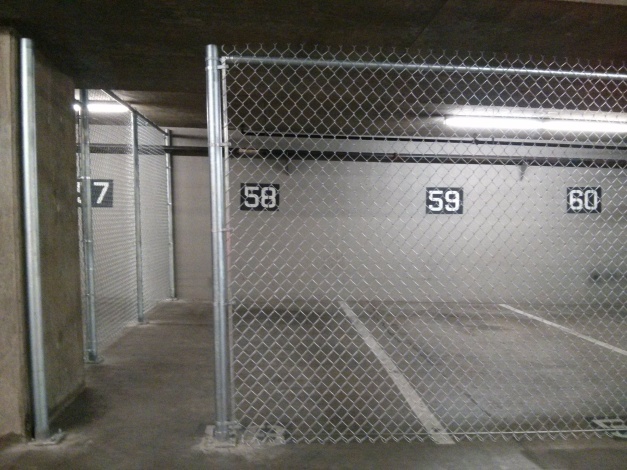 Strata might think they’re installing bike storage but they just don’t see the big picture…or the impending Z attack. Thank goodness one of us is planning ahead.

Strata is in the process of installing a zombie cage in our parking garage.

Zombie cages are a much better idea than closets and walk-in freezers for zombie warehousing.

Firstly, if the need arises you can kill the undead through the bars.

Secondly, cages are open to the air so you can use them as a segregation area to quarantine and observe survivors (without the risk of asphyxiation). Little known fact, quarantine is the most overlooked portion of all zombie plans.  Seriously, just because a person says they’re not bitten, you’re just going to let them in?  My way you can watch them until you’re sure they’re not in the process of turning into the worst neighbours ever. 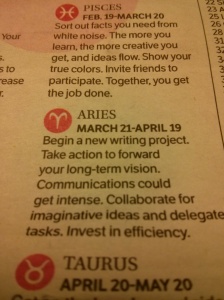 Normally I don’t read my Horoscope. Then something like this happens and I have to re-think my whole belief system. Maybe calculus isn’t the root of all evil.

Lastly, zombie cages a great place to store bikes until the unfortunate event (read zombie apocalypse) unfolds. (There’s a small chance that Strata only knows about the cage’s utility for bike security.)

In other news I’m thinking of taking on a new writing project.  I’m still working on the first draft edits of Super to get it submitted, but when the Universe gives hints this strong, they’re hard to ignore.

I get it Universe, one new story on the way.

The first few parts of my horoscope I understand.  Pen, paper, get a new story going. Check. But the “delegate tasks” part might be  a bit of a challenge considering I don’t have a staff to delegate said tasks to. I’m pretty sure that I’m going to have a compliance problem when I walk up to random strangers with a bag of laundry and inform them that they have what it takes to succeed. (I like to add a little positive feedback when dumping undesirable tasks.)

What would happen if delegating to strangers was an option? Would it be one long series of passing the buck until you got your own task back?  Would a system of flags be developed? (“Sorry I’ve already been delegated to today.”) Would people develop habits to avoid seeing other people, only going out to get groceries when they were unlucky enough not to catch a neighbour in the hallway?