Posted by kosturcompose76 on July 27, 2017
Posted in: Uncategorized.

The theme for Roadtrip 2017 is officially Fire and Ice. 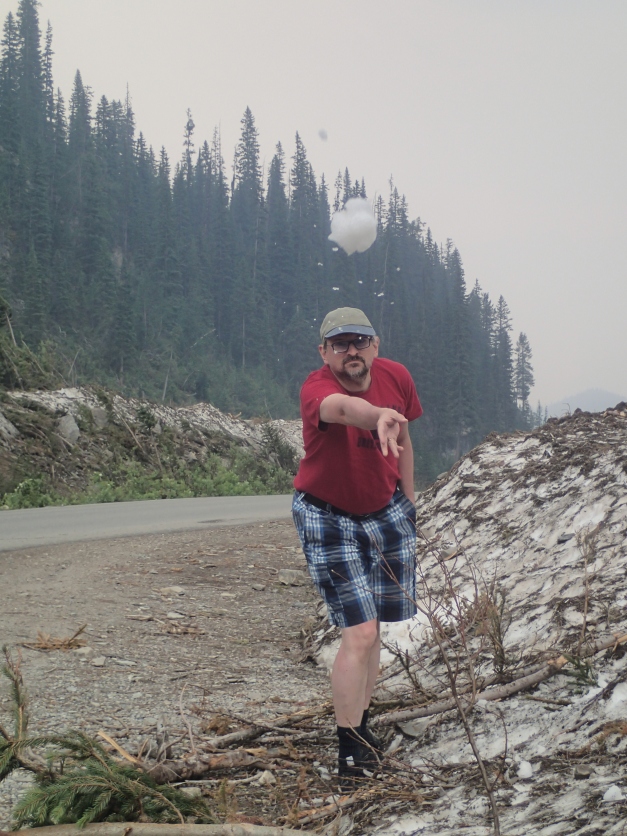 Setting up this shot was fun…and a bit painful, but real art comes with pain right?. PS, the overcast sky is smoke from a nearish forest fire. “No kids, we’re perfectly fine. That fire’s a long way away. Let’s stop and climb an avalanche.” (Not sure if I’m completely irresponsible or the best auntie ever.)

Posted by kosturcompose76 on July 25, 2017
Posted in: Uncategorized.

This is the sort of math problem I can solve. Just add dancing and my life will have peaked. We arrived at Miette Hot Springs Resort and it may be the quaintest place I’ve ever stayed. Little cabins. Outdoor activities. A lodge.  Yay!  I thought I was a total geek alone in the world until my husband started to whistle the some from the talent show at the end of Dirty Dancing.  He is perfect for me.

PPS. It is COLD here at night…but dancing works up a sweat right?

PPPS. The sky is smokey and orange. If our luck continues we may drive away tomorrow chased by flames licking our tires. Fingers crossed. (Against the fire. I’m not a monster. Although that would look pretty cool.)

Posted by kosturcompose76 on July 23, 2017
Posted in: Uncategorized.

Roadtrip 2017 is officially on…kind of.

Plan one was to visit Barkerville via Clinton and Williams Lake, then head North and East. Then they closed Highway 97 for forest fires and evacuated several communities between us and our destination.

Plan two was to divert to our third stop (McBride). When we called our pre-booked hotel to check the status of the roads the hotel was all “One road is open. Don’t come here.” (This is about the forest fires right?  Someone would tell me if my antiperspirant had failed?)

At what point should I take the hint? Staycation anyone?

PS, this is definitely going in a story somewhere.  I’m not sure yet, but a truck full of diesel, encroaching forest fires, and a Coke truck (three cars back) that refused to open up and prove his truck was empty…there is a story here somewhere. (I didn’t ask the guy in the Milk truck if he was carrying, somehow a milk party on the side of the road didn’t sound like as much fun.)

PPS, I’m detoxing from another attempt to give up Diet Coke.  I really wanted the Coke truck to open up.