Great Day – Could be a Bad Night

Posted by kosturcompose76 on September 30, 2013
Posted in: Uncategorized. 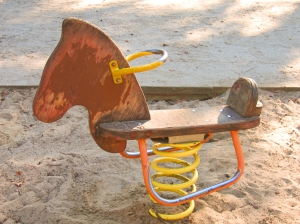 Because of an ankle injury this may be the closest I get to riding in the next little while. Stupid ankle.

Mounted combat at Carosella and a new season of Walking Dead is released on Netflix. It’s a good day.

Now I’m trying to decide if it is better to watch a few episodes before I go to sleep or just stay up all night watching them all.

See, I’ll be exhausted either way…so staying up isn’t _that_ selfish and irresponsible.

Plus if I don’t watch them all tonight I know I will watch more tomorrow and repeat the nightmare cycle. (My relationship with cake should be sufficient proof that I don’t have enough will power to stay away from things that are bad for me.)

Besides, wouldn’t an exhausted but happy version of me be more productive than an exhausted me for the whole week.

PS. I actually got some writing done this weekend. I think it’s the impending deadline of the Surrey International Writers’ Conference. I love me a deadline.

I was watching the Walking Dead today and I have zombies on the brain. Not literally or it would be harder to write this. No one comes back to read alhjk;awnl;;  aewk;hjt9032buaekhjlf. (Totally how a zombie would type. Their dexterity leaves something to be desired.)

Anyway, sometimes people in the show die. (Not a spoiler right?  I mean it’s a zombie show called The Walking Dead, the dead have to come from somewhere.)

As the body count started to rise I started thinking about how you might choose to commemorate those of your group that died while you struggle to find a zombie safe zone. I thought of a journal. One whose only entries were descriptions of the lost and how they died. “{Name} died today. They were …” Not only a great memorial but a few generations post-zombie-apocalypse it would make a compelling read… But there could be other ways.  Maybe one of the survivors was a tattoo artist and could carry the faces and names of the lost permanently.

What would you do to remember your lost-to-the-horde comrades?  Happy writing.