Oops – My Travel Plans Suck and Time Zones are Dumb

Posted by kosturcompose76 on September 25, 2013
Posted in: Writing Exercises. 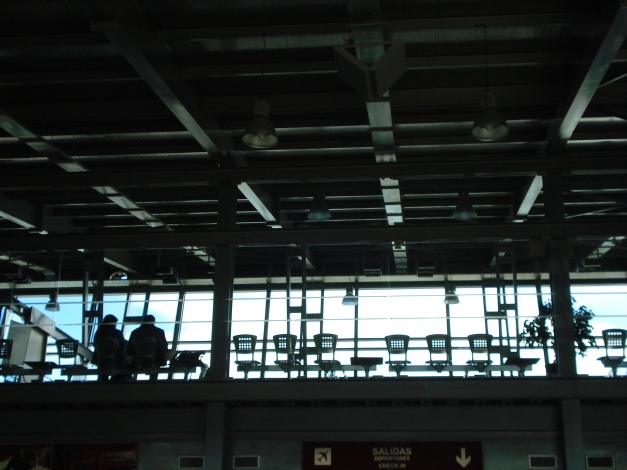 Personal boundaries. After 2 (of five) hours waiting in an airport napping in public doesn’t feel so embarrassing. Seriously…five hours…in Milwaukee.

I went away for an extended long weekend.

I left a whole day for travel so I wouldn’t be tired coming home.

But somehow I still managed to spend over five hours at the Milwaukee airport (contemplating the purchase of a cow-tipping t-shirt) and arrive home past midnight.

Note to self, midday flights are only a good idea if you have a short flight or a late hotel check-out.

In good news the long weekend was amazing. Stabby-good fun had by all.

NB. It was a fencing event so most of the stabbing was consensual in nature. I cant wait for WMAW 2015!

In other good news I invented a new game; Hunter – Moose – Semi. (It’s amazing what late night conversations and physical exhaustion do to imagination.)

It may seem familiar but it’s totally different…you see, it has a moose.

When I’m in an airport I find myself wondering where people are going. The airport is a great place to people watch and on this trip I found myself watching people and wondering where they were going and why they were traveling. (Reading cow-tipping t-shirts and trying on cheese hats can only keep you occupied for so long. BTW…Nothing tips like a cow.)

On this trip I watched a young couple that seemed rather out of place in Milwaukee. (He was a gangly young man with scraggly long hair. She was a shy looking Asian girl carrying a round carry-on bag that looked like a saucer sled.) They were very much in love but I couldn’t picture either of them in a cheese hat so they were the perfect couple for me to watch and wonder about. I came up with a whole story about why they were traveling.  (He had just received a music scholarship. They couldn’t stand the thought of parting after a five year courtship through high school. She had convinced him to give up the goth make-up but he wouldn’t cut his hair. The crazy sled was actually an instrument he had built himself. Watch out world.)

What do you think they were doing?  Write the story of how this couple ended up waiting for a flight the heck out of Milwaukee.